H e found himself treading upon "bottomless, unsteady earth" crawling with small flies. The novelist Vasily Grossman , then a Red Army soldier, was walking across the still-settling wasteland where the extermination camp of Treblinka had stood until nine months before. As Timothy Snyder writes, Grossman "found the remnants: photographs of children in Warsaw and Vienna; a bit of Ukrainian embroidery; a sack of hair, blonde and black". The loose soil, flung around by peasants digging for Jewish gold, was still "throwing out crushed bones, teeth, clothes, papers".

H e found himself treading upon "bottomless, unsteady earth" crawling with small flies. The novelist Vasily Grossman , then a Red Army soldier, was walking across the still-settling wasteland where the extermination camp of Treblinka had stood until nine months before.

As Timothy Snyder writes, Grossman "found the remnants: photographs of children in Warsaw and Vienna; a bit of Ukrainian embroidery; a sack of hair, blonde and black". The loose soil, flung around by peasants digging for Jewish gold, was still "throwing out crushed bones, teeth, clothes, papers". The history of modern Europe, and especially of its fearsome 20th century, is like that field: unsteady under the scholar's foot.

Forgotten stuff works its way to the surface. Some historians use metal-detectors to snatch out something flashy. Others do patient archaeology, relating the tiniest object in each stratum to its context. Snyder is the second kind. In this book, he seems to have set himself three labours. The first was to bring together the enormous mass of fresh research — some of it his own — into Soviet and Nazi killing, and produce something like a final and definitive account.

Since the fall of communism, archives have continued to open and witnesses — Polish, Ukrainian, Belarussian especially — have continued to break silence. But Snyder's second job was to limit his own scope, by subject and by place.

He is not writing about the fate of soldiers or bombing victims in the second world war, and neither is he confining himself to the Jewish Holocaust. His subject is the deliberate mass murder of civilians — Jewish and non-Jewish — in a particular zone of Europe in a particular time-frame. The time is between about — the start of the second Ukraine famine — and The zone is the territory that lies between central Poland and, roughly, the Russian border, covering eastern Poland, Ukraine, Belarus and the Baltic republics.

Snyder's "Bloodlands" label is jarring, a title those beautiful lands and those who now live there do not deserve. Snyder's third aim is to correct, radically, the way we remember what happened.

To start with, the public in western countries still tends to associate mass killing with "Nazi concentration camps", and with Auschwitz in particular. Stalin is thought to have killed far more people than the Nazis by consigning millions to the gulag.

But neither assumption is accurate. In the Soviet Union, it now appears that, although about a million men and women perished in the labour camps, nine out of 10 gulag prisoners survived. Stalin's great killing took place not in Siberia, but in the western Soviet republics, above all in Ukraine where in the 30s at least four million people died in man-made famines and in the slaughter of the " kulak " peasantry.

In the concentration camps of the Third Reich, a million prisoners died miserable deaths during the Nazi period. But 10 million others who never entered those camps were shot mostly Jews , deliberately starved to death mostly Soviet prisoners of war or gassed in special "killing centres" which were not holding camps at all.

At Auschwitz, the overwhelming majority of Jews were taken straight to the gas chambers on arrival. And Auschwitz, terrible as it was, formed a sort of coda to the Jewish Holocaust. By the time the main gas chambers came on line in , most of Europe's Jewish victims were already dead.

Some — the Polish Jews especially — had been gassed in the three killing centres set up on Polish territory: Belzec, Sobibor and Treblinka. But most had been shot and pitched into mass graves by German police units operating far to the east in Ukraine, the Baltics and Belarus, the Einsatzgruppen who moved from village to village behind the front lines of war. Snyder shows convincingly how the Holocaust emerged. Up to the German invasion of the Soviet Union in June , Hitler's thinking was still about deportation: when the USSR was conquered, all Jews would be driven into its vast wildernesses to labour and die of hunger and disease.

But Himmler, impatient, sent in the Einsatzgruppen on the heels of the advancing army to begin the slaughter. By the end of , they had shot a million Soviet Jews.

Without the conquest of Soviet space, deportation was impossible. So the decision was taken to solve the whole remaining "Jewish problem" by mass murder. As Snyder puts it, "the final solution as mass killing 'was spreading to the west.

The three gassing centres built in occupied Poland, followed by another at Auschwitz-Birkenau, were designed to exterminate the entire Jewish population of Europe west of the old Polish-Soviet frontier. East of that line, in the lands where most of Europe's Jews had once lived, the job had already been done by the firing-squads. All this modifies our view of this appalling period. The British, who liberated Belsen, at first located the slaughter in "the concentration camps".

Later, as knowledge of Auschwitz spread, came the image of "impersonal" industrialised killing. Now it becomes clearer that at least half the killing was anything but industrialised; it was done by individual human beings aiming their guns at other naked and helpless human beings. Snyder reinforces this by aligning the Holocaust with the fate of the Soviet prisoners of war. Herded into enormous wired enclosures with little or no food or shelter, they were intentionally left to die.

In German-occupied Poland alone, half a million Soviet prisoners starved to death. Counting the hunger victims in besieged Leningrad, this most primitive method of mass killing took something like four million lives in the course of the war. Snyder insists that the colossal atrocities in his "bloodlands" have to be set inside a single historical frame. To look at them separately — for instance, to see Hitler's crimes as "so great as to stand outside history", or Stalin's as a monstrous device to achieve modernisation — is to let the two dictators "define their own works for us".

This, too, is quaggy ground for historians. In the cold war and afterwards, claims that "Stalin was worse than Hitler", or that "communism and fascism come to the same thing", generated more heat than light. But Snyder doesn't fall into such holes.

He is saying that both tyrants identified this luckless strip of Europe as the place where, above all, they must impose their will or see their gigantic visions falter. For Stalin, it was in Ukraine that "Soviet construction" would succeed or fail; its food supplies must be wrested from the peasantry by collectivisation and terror.

And foreign influence — which meant above all Polish — must be flamed out of the western borderlands. Snyder reveals the little-known fact that the Polish minority were the main ethnic victims of the great terror between and well over , were shot for fictitious "espionage".

This book's unforgettable account of the Ukraine famine shows conclusively that Stalin knew what was happening in the countryside and chose to let it run its course some 3 million died. For Hitler, too, seizing Ukraine and its produce for Germany was crucial for his new empire. So was smashing Polish identity. Between them, Germany and the Soviet Union tried to behead the nation's elite by murdering , Poles in the first 21 months of the war.

The figures are so huge and so awful that grief could grow numb. But Snyder, who is a noble writer as well as a great researcher, knows that. He asks us not to think in those round numbers. Topics History books. Reuse this content. Order by newest oldest recommendations. Show 25 25 50 All. Threads collapsed expanded unthreaded.

Bloodlands: Europe Between Hitler and Stalin by Timothy Snyder – review 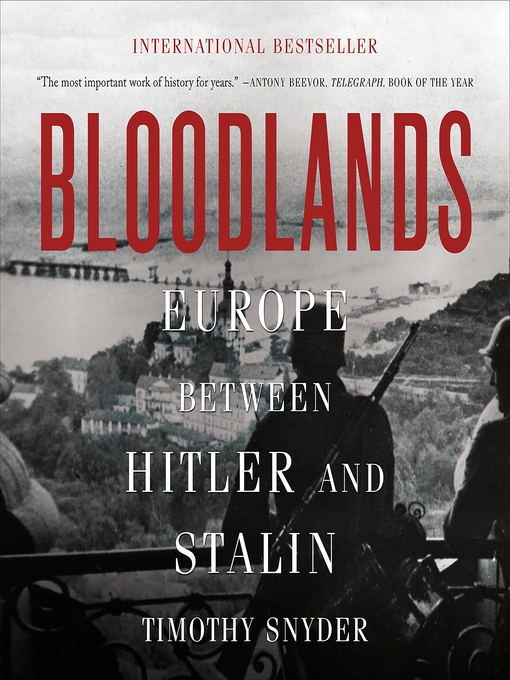 Goodreads helps you keep track of books you want to read. Want to Read saving…. Want to Read Currently Reading Read. Other editions.

To be asked to review such a text nearly seven years after its original publication is to an extent to be asked not only to consider the success of the book in meeting these fundamental aims, but its impact on a wider field and understanding of its subject matter. Snyder set out to change our understanding of the Bloodlands — so, to put it crudely, how far did he succeed? In some senses, as Snyder acknowledges, Bloodlands was a history for its own time. It is, self-evidently, a post-Cold War project not least because in practical terms it has access to insights that were unavailable to scholars before the collapse of the Soviet Union.

Bloodlands: Europe Between Hitler and Stalin

Timothy S nyder , Bloodlands. Europe between Hitler and Stalin. With so much written, separately and in tandem, one wonders if there is a room for yet another study of the so-called totalitarian twins. Certainly so, argues Timothy Snyder. Snyder takes to task the entire body of literature that preceded his own Bloodlands: Europe between Hitler and Stalin.

Any cookies that may not be particularly necessary for the website to function and is used specifically to collect user personal data via analytics, ads, other embedded contents are termed as non-necessary cookies. It is mandatory to procure user consent prior to running these cookies on your website.